Kindness Through the Eyes of Children: the Results of the Drawing Competition “Rinat Akhmetov. The Power of One Man’s Help “

The drawing competition timed to coincide with the 15th anniversary of the Rinat Akhmetov Foundation is over. It aroused great interest – about 80 children sent their works, receiving assistance from the country’s most famous philanthropist. On the last day of summer, a specially assembled jury selected the best of the best. It was a very difficult task, because there was not a single passage pattern. Each child who took part in the competition put his heart and soul into his work. 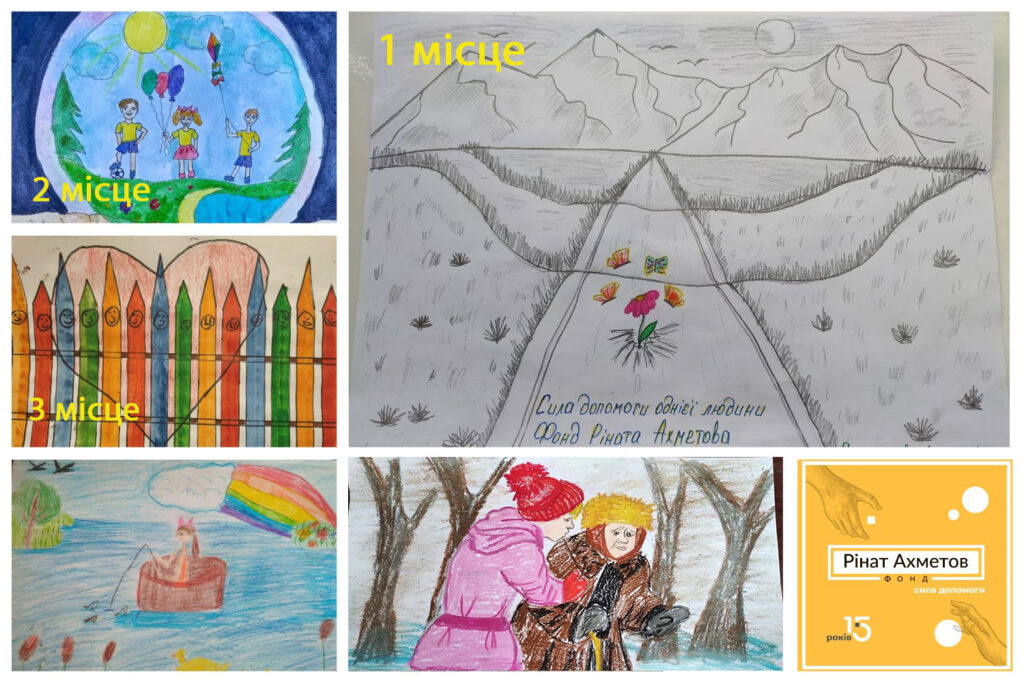 – These drawings have everything: experienced pain, conquered fear, love, hope and gratitude. For Rinat Akhmetov, helping children has always been a priority, so it is especially pleasant that the guys who received his support contributed to the celebration of the Foundation’s anniversary. Now those drawings will go down in the history of the Foundation, and their authors, together with the famous artist Dasha Skorubskaya-Kandinskaya, will create a layout of the Foundation’s unique postage stamp, ” Natalya Yemchenko said, a member of the Supervisory Board of the Rinat Akhmetov Foundation, who was included in the jury.

A psychologist, an expert of the Rinat Akhmetov Foundation Marina Sorokina notes that the drawings sent to the competition show how much the inner world of Donbass children has changed recently.

– A couple of years ago, children who went through an armed conflict painted images filled with pain. Now in their drawings there is more optimism, more hope and smiles, – Marina Sorokina said.

The jury worked for almost two hours. They argued, laughed, discussed … As a result of heated discussions, Nastya Pushkareva from Severodonetsk had got the top place.

– If you observe a gray life around, then you need to take a closer look. There will definitely be something bright nearby. Something that will please you, – that was how the girl explained the idea of ​​her drawing. She has created a philosophical canvas with strong images of freedom, future and hope.

– Very strong work. Nastya was able to convey a palette of emotions using ordinary pencils and just three colors. This work is full of symbols. It’s amazing that a child of this age put so many meanings into an ordinary drawing, says artist Daria Skorubskaya-Kandinskaya.

Soon Dasha will have to work on a painting, which will become a sketch for the Rinat Akhmetov Foundation’s stamp. The artist will be inspired by the work of Nastya Pushkareva and other winners. Including drawings by Danil Klyakhina from the village of Vozdvizhenka, Donetsk region (his drawing took second place) and Vlad Moruga from Kramatorsk (third place). Danya drew a planet where only joy and happiness live, and Vlad – his heart behind the fence. This work was awarded for conceptuality. The boy himself says about it:

– People should hold on to each other, like boards on a fence. We must help each other. Then everything will be fine.

All three winners survived the horrors of the armed conflict and underwent psychological rehabilitation on the project “Rinat Akhmetov – To Children. Peaceful summer “. The love for drawing appeared during art therapy classes.

In the near future, the winners will receive prizes: Nastya Pushkareva will get a smartphone, Danil Klyakhin – a tablet, and Vlad Moruga – an action camera. 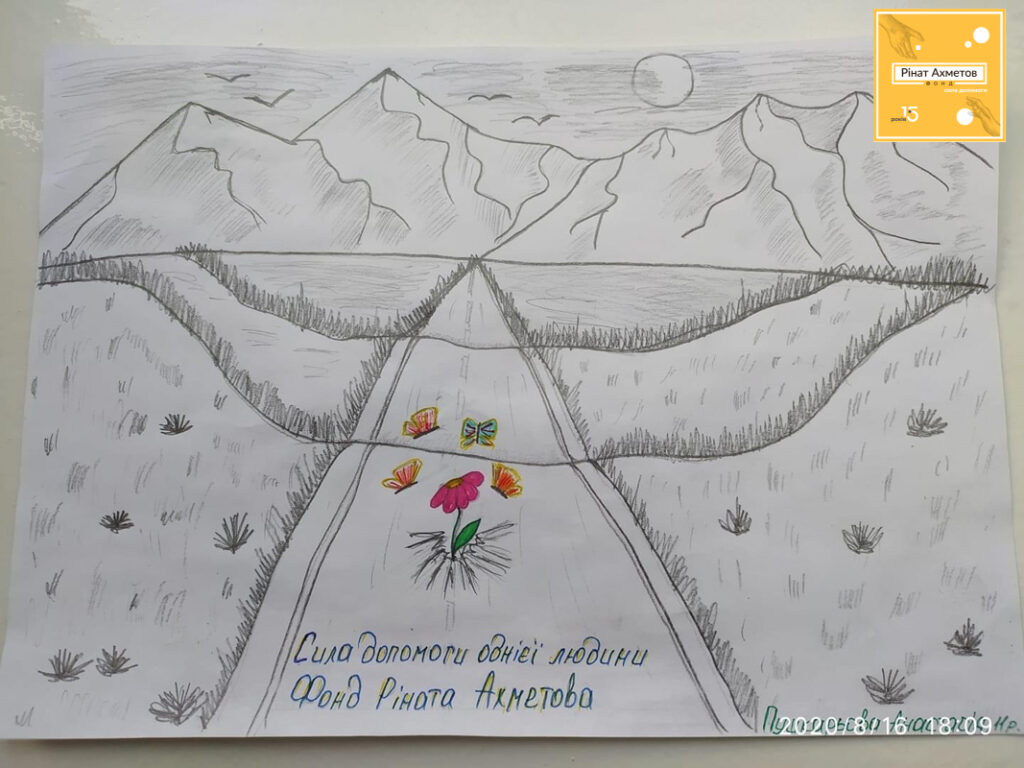 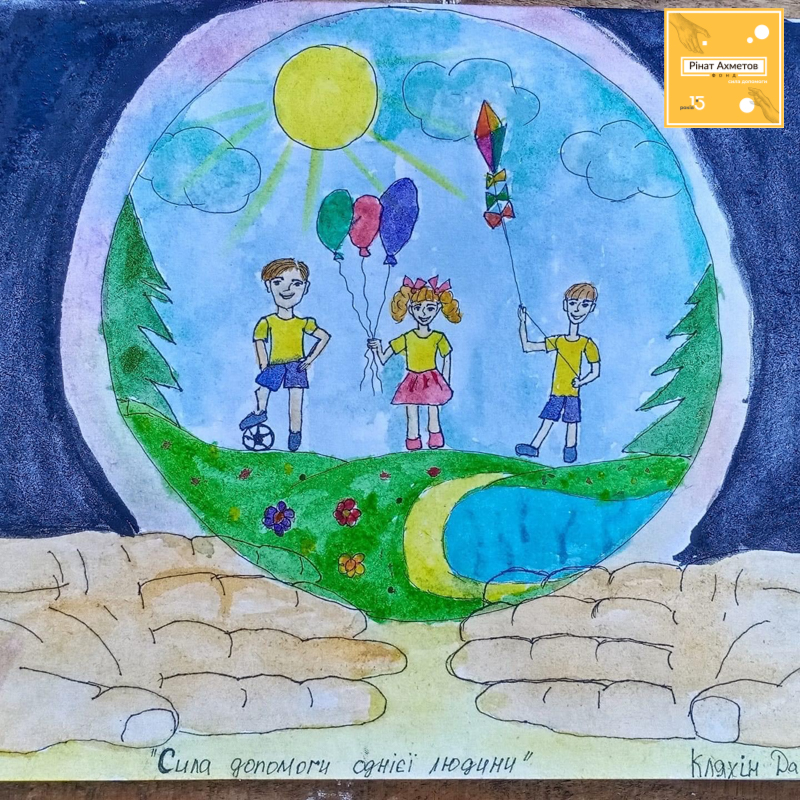 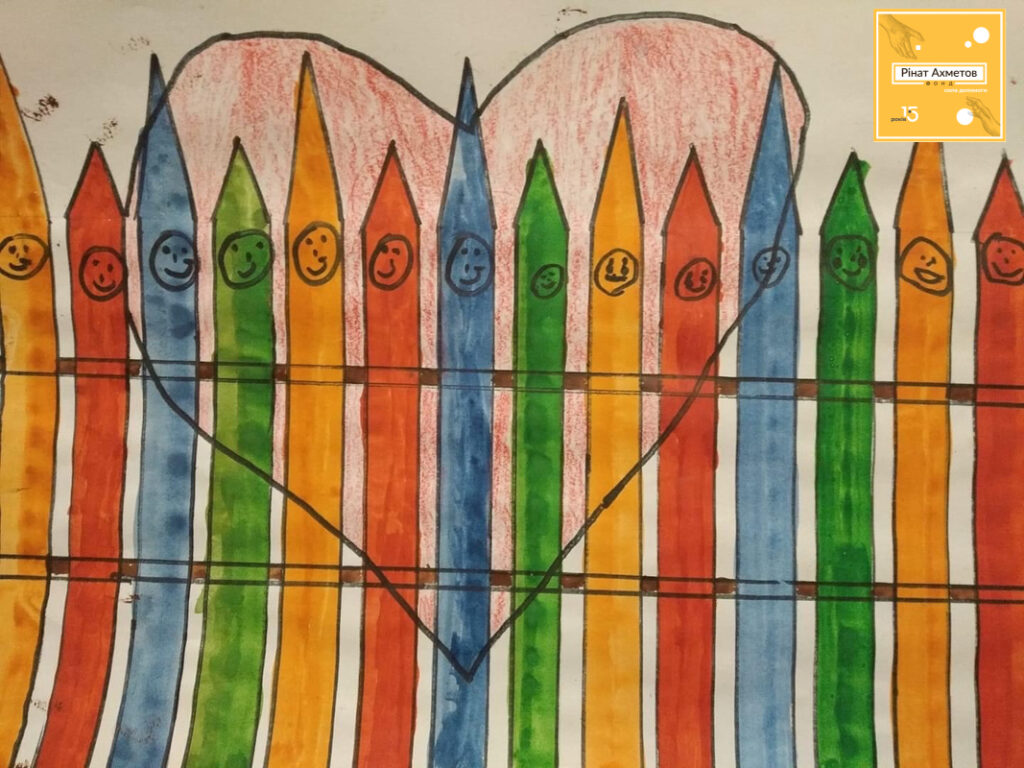 Previous Post
28 educational institutions of Zaporizhzhia received interactive whiteboards and preventive means against COVID-19 as a gift from Zaporizhstal
Next Post
Help and Support: Today is International Charity Day