At the end of the May this year, the “Zaporizhstal” Steel Works filed an application to participate in the competition of the State Architectural-Construction Inspection of Ukraine (SACC) for the best industrial building in 2014. The largest industrial facility construction – hydrochloric acid pickling line in the cold rolling department №1 of the “Zaporizhstal” Steel Works will participate in the competition.

The active phase of construction of the hydrochloric acid pickling line in the cold rolling department №1 and acid regeneration plant (CPL-4) was started in January, 2014 and was put into operation at the end of October, 2014. CPL-4 – is the unique industrial facility in Ukraine that has no analogues. Its feature – is a fully automated production and excluding of the human factor in mechanism operation. Production capacity of the CPL-4 is 1350 th. tonnes of pickled metal per year.

“The total investments of the Works in amount of 1.65 billion hryvnias in 2014 – is the most large-scale invest-ments in the economy of our region and the whole country. Part of these funds is focused on the construction of industrial facility CPL-4 that has no analogues in Ukraine and in the world only two similar projects are imple-mented,”- said the CEO of the “Zaporizhstal” Steel Works Rostislav Shurma. 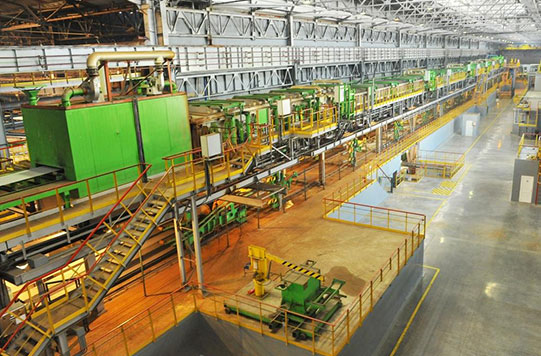 During the CPL-4 construction it was used 3.5 th.tonnnes of steel constructions, 13 thousand cubic meters of concrete, and 30 km of cable products. Industrial facilities area is 1.45 hectares. The value of project investments is about 762 million UAH.

CPL-4 has an ecological component – reducing emissions of sulfuric acid fumes by 83%, the total elimination of discharges in the Dnieper River of Cold Rolling Department №1, as well as improving the quality of the metal. The project uniqueness is that all waste acid from the production process is fed to the acid regeneration plant and fully regenerated and after fed back into production.

The competition results will be known in July, 2015.

Previous Post
REVAMPED BLAST FURNACE NO. 2 OF «ZAPORIZHSTAL» JSC OPERATES IN ACCORDANCE WITH THE ECOLOGICAL STANDARDS
Next Post
“ZAPORIZHSTAL” STEEL WORK ALLOCATED UAH 250 THOUSAND FOR REPAIR OF THE HOSPITAL №5