On the 21st of March, 2013 the shipment of the products made by “Zaporizhstal” I&SW had begun from Zaporozhye river port to the Black Sea and Mediterranean Sea regions. It is planned to ship 23 thousand tons of the metal roll stock in March, and for the whole navigation period in 2013, the planned shipment volume of the Works’ metal products will make up 500 thousand tons.

Cooperation of “Zaporizhstal” I&SW with Zaporozhye river port resumed in October, 2012. From October to December, 2012, in the period of navigation, it was shipped over 50 thousand tons of the Works’ products through the river port. Thanks to the partnership with “Zaporizhstal”, Zaporozhye river port considerably increases the handled freight traffic volume, the delivery terms are considerably decrease for the consignees of the metal products. 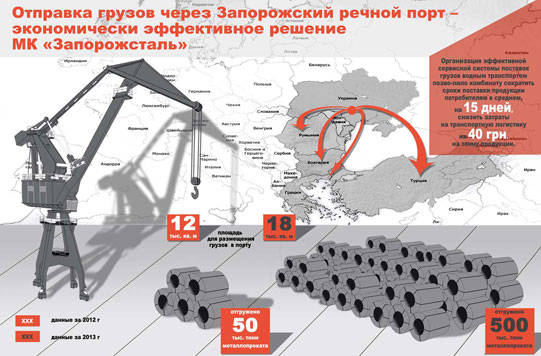 “We speeded up the delivery terms of our products to our customers in average for 15 days, and in the conditions of dynamic market, this is a considerable advantage”, — the General Director of JSC “Zaporizhstal” Rostislav Shurma noted.

Within the framework of interaction between “Zaporizhstal” I&SW and Zaporozhye river port, by the beginning of the navigation period, all the required conditions are arranged in the port for the stable in-time shipment of the products by means of waterborne transport to the consignees. For this purpose, the area for the Works’ freights placement was expanded up to 12 thousand square meters and the number of involved handling machines of 2 berths of the river port was increased.