On November 25, 2019, by the decision of the General Meeting of Shareholders of Zaporizhstal PJSC, Oleksandr Myronenko was appointed Director General of the enterprise. 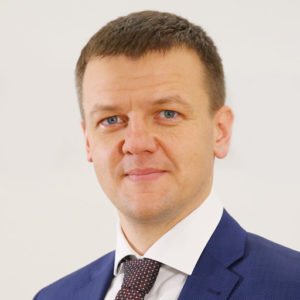 Oleksandr Myronenko has a great experience in the steel-making industry. Oleksandr joined Metinvest Group in 2007 from Smart-Holding Company, and during that time period, he has gone from an expert in production and sales planning to a Production Director at the Metinvest’s Operations Directorate. In this position, he was engaged in increasing the operation efficiency of the metallurgical enterprises of the company. From 2007 to 2016, Oleksandr worked at Promet Steel JSC (Bulgaria), and from 2010 to 2019 – in the Operational Directorate of the Metinvest Group. He was also a member of the Supervisory Boards of YCCP (“Yenakiieve Coke and Chemicals Plant” PrJSC) and Promet Steel, and from 2017 – he was a Chairman of the Supervisory Board of the last enterprise.

“The main tasks set for me by the shareholders are the stable work and further development of Zaporizhstal Works. Today, when the steel-making industry is entering the toughest global crisis in the last 10 years, it is important to implement the developed anti-crisis action plan correctly in conjunction with operational improvements. This will allow us to maintain the maximum number of jobs and uninterrupted production at the Works. I am sure that together with a strong team of Zaporizhstal Works we will worthily go through this difficult period,” said the General Director of Zaporizhstal Works.

Oleksandr Myronenko was born on December 31, 1981 in Kyiv. He has graduated from the National Technical University of Ukraine “Kyiv Polytechnic Institute”. He is married and brings up two children.