METINVEST TO SUPPLY 90,000 ARMOURED VESTS TO THE DEFENDERS OF UKRAINE

Rinat Akhmetov and Vadym Novinskyi’s Metinvest Group will donate 900 tonnes of steel, sufficient for the production of about 80,000 armoured vests for the Armed Forces of Ukraine and the territorial defence forces. Another 10,000 armoured vests were purchased from outside Ukraine as part of the procurement of finished body armour. This will account for approximately 90,000 armoured vests that the Group will supply to Ukraine’s defenders and will cover a major portion of the needs of the military. Metinvest has also allocated funds to purchase thermal imagers, helmets, first aid kits and medical tourniquets and turnstile buckles 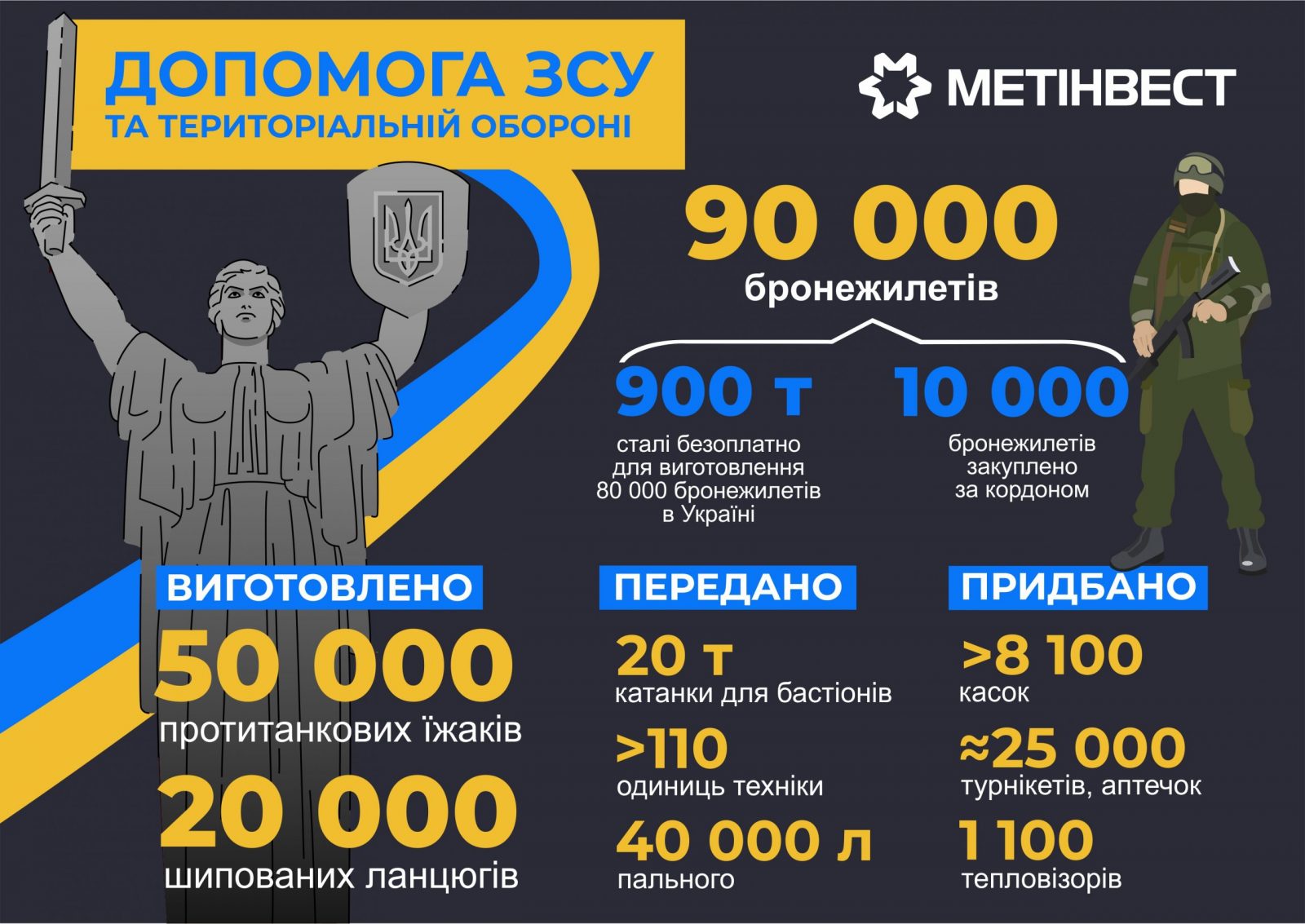 Two hundred fifty tonnes of material have been handed over to companies that specialise in processing armour steel. Some steel is produced by Metinvest Group enterprises and some steel is purchased, both inside and outside of Ukraine. Metinvest supplies its rolled steel free-of-charge to companies that are certified to make armoured vests, which are then distributed to the Armed Forces of Ukraine and the territorial defence forces.

Since the beginning of the war, it has not been easy to supply Ukraine’s defenders with body armour. Before the war, the main semi-finished product used for the manufacture of armour plates was imported low-alloy and alloy quenched steel plate (or plate that has undergone quenching and low-temperature tempering).

The plate had to be cut into smaller plates of 250×300 millimetres with laser or plasma cutting machines, bent and coated with anti-fragmentation and other protective materials and put into the armoured vests. Finished armour plates were also purchased.

Metinvest-SMC was the first company in Ukraine to organise regular imports of steel for armour plates and to establish cooperation with several manufacturers in Europe and Turkey. The company has handed over 200 tonnes of ballistic steel produced oversees for the manufacture of armoured vest plates. The volume of steel imported under current contracts will exceed 600 tonnes.

With the outbreak of war, supply chains were subject to such disruption that the required quantities of imported metal were not available in Ukraine. Companies had to find solutions using Ukrainian production facilities, taking into account that some of the manufacturing sites are unable to operate.

Metinvest began its own production. The Group’s engineers investigated which steel grades were comparable to ballistic grades in terms of chemical composition and other properties. The Group has developed an in-house technology for making steel, forming the semi-finished products, as well as the cutting and heat treatment of final products. This is how it was possible to get a forged product from 30KhN2MA steel, which was then turned into a hot-rolled material with a modified chemical composition.

To be suitable for bulletproof vests, steel must provide the required level of ballistic resistance, which depends on the quality of the metal itself and its high-temperature treatment. Metinvest Group and other companies have developed production processes that assure bullet resistance of 8 millimetre thick plates, which qualify for a class 4 rating according to the requirements of GOST 8782 standard, and this is confirmed by the results of ballistic tests.

The Group has the capacity to produce 20 tonnes of this type of steel each week. So far, about 300 tonnes of steel have been supplied to partner enterprises for the manufacture of body armour plates.

Our people are made of steel. They have steel character, steel muscles, and now they have steel protection. It is an honour for Metinvest Group to be able to provide the defenders of the country with body armour and other means that helps to save the life and health of the soldiers. We were faced with a challenge, because the steel that is used for body armour is a special steel, and it was impossible to just start producing it at the Group’s plants. There were also difficulties with purchasing the materials and finished body armour abroad. But working together, we were able to overcome all of the obstacles.

Apart from steel for armour plates, Metinvest also buys finished armoured vests, helmets and medical supplies. In the early days of the war, the company decided to allocate EUR10 million for these needs. As of today, 10,000 armoured vests, over 8,000 helmets, and about 25,000 medical tourniquets, turnstile buckles and first aid kits have been purchased. The tactical gear that was purchased includes 1,100 thermal imagers.

The supplies will be delivered in several stages. At the beginning of April, 650 sets of armoured vests and helmets were delivered to the defenders of Kyiv and Zaporizhia regions.

In early March, Rinat Akhmetov’s Metinvest Group transferred US$500,000 to a dedicated charitable foundation for the purchase of protective gear and first aid kits for the territorial defence forces of Zaporizhia. The same amount was allocated by the Vadym Novinskyi Foundation.

This helped to focus all available efforts on supplying the Armed Forces of Ukraine and the territorial defence forces with protective gear in the first place. Armoured vests, helmets, thermal imagers and medical supplies can greatly enhance the security of our soldiers. However, the assistance provided by the Group does not stop with this. In the future, the Group intends to provide Ukraine’s defenders with the armour that can help achieve a tactical advantage.

We also help to defend the cities of Ukraine: since the start of the war, Metinvest and its partners have handed over around 50,000 hedgehog anti-tank obstacles, over 20,000 studded chains to protect against wheeled vehicles, and anti-amphibious hedgehogs. The Group has also provided 20 tonnes of wire rod for mobile defensive barriers. Read more about helping the Armed Forces of Ukraine and the territorial defence forces on a special long-read.