NOT BY METAL ALONE: PJSC “ZAPORIZHSTAL” HAS CHOSEN THE BEST TEAM OF KVN

Stereotypes are broken! Metallurgists are not only strong steelmakers standing near open-hearth furnaces, but also cheerful people with a fine sense of humor. This was proved by the final of the KVN game for the Cup of the General Director of PJSC “Zaporizhstal” Rostyslav Shurma. 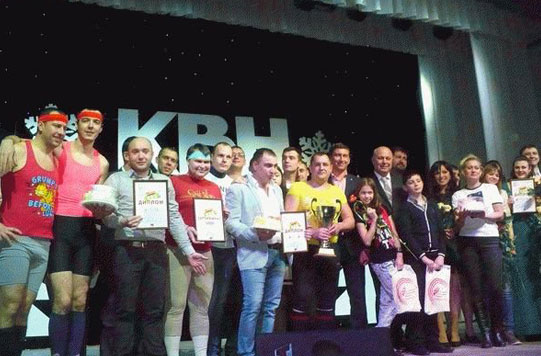 A relaxed atmosphere and fun reigned in the evening at the Centre of Culture of Metallurgists. Jokes by KVN teams forced the hall to burst with laughter. With each performance, the audience received even more positive emotions. The humor holiday was a success!

– People who know how to work well, can also have a good rest, – summed up the chairman of the jury, the First Deputy of General Director – Production Director Alexander Tretyakov. – We have good production figures, good production cost, and today we showed how we can have fun. I am pleased to visit KVN. The evening is wonderful, all teams are fine.

To determine the best of the five teams – was not easy. All were on top. Finally, the victory was got by the  KVN team “Penalty”. The guys received a cup and a certificate for 5 thousand hryvnia.