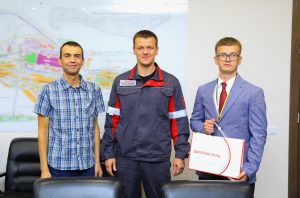 On 30 July 2021, General Director of Zaporizhstal Aleksandr Mironenko congratulated Yaroslav Panchenko who graduated from Zaporizhzhia  Gymnasium No. 25 with the highest honour and presented him a lap-top.

“We are always delighted with successes of our employees and their children and reward them for their achievements. It is one of good traditions of our big Zaporizhstal family. The highest honour (gold medal) is the first personal success children achieve on the way toward personality formation and career advancement. I wish that they continue to develop and learn new things even outside the school walls and reach new heights,” said Aleksandr Mironenko.

Yaroslav is a son of the Hot Rolling Department Head Vyacheslav Panchenko. He sees his future in international relations. Yaroslav has already applied to the highest educational institution in Kyiv; however, he plans to live and work in Zaporizhzhia after graduation.

As reminder, Zaporizhstal and other enterprises of Metinvest present school kits to school students whose parents work at the Company’s enterprises, for the beginning of every school year.

Zaporizhstal of Metinvest Group not only supports its employees’ children but also implements educational projects for young people in Zaporizhzhia. In 2020, the final of WorldSkills Ukraine competition was held in Zaporizhzhia under support of Metinvest. Zaporizhstal systematically implements a scholarship program for students from specialized colleges and universities in Zaporizhzhia, giving support to the talented students in core specialities in the form of additional scholarship allowance.

In 2020, Zaporizhstal presented interactive boards and personal protective equipment for COVID-19 to 28 educational institutions it supports, for the beginning of school year.  In 2021, STEAM Camp educational project was conducted in Zaporizhzhia for teachers of hard sciences under support of Zaporizhstal of Metinvest Group. 90 teachers from Zaporizhzhia learnt new digital teaching tools and visited modern enterprises in Ukraine.